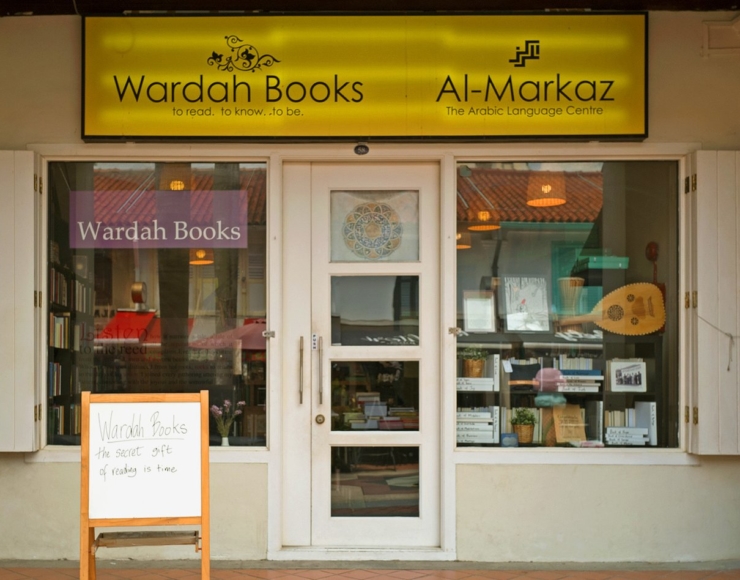 We hope the children of Singapore are ready to go on a storytelling adventure with Jamila and her grandmother, as Wardah Books in Singapore is now selling An Ocean in One Drop!

Established in 2002, Wardah Books is located in Bussorah Street, at the heart of Singapore’s centre of Malay/Muslim literary history.

The first Muslim bookshops in Singapore started out around the middle of the 19th century. The retail of books began in the premises of printers, some of which evolved into substantial bookshops. These first print shops – or print-cum-bookshops – were clustered in Kampong Glam around Sultan Mosque, especially along Sultan Road (later renamed Bussorah Street in 1909 by the municipal authorities).

Singapore’s place as a cosmopolitan centre in the region is well established, but it is often overlooked that Singapore was also a free port for the trafficking of new Malay political ideas and Islamic religious attitudes. The medium for all this was print. And the place where readers could readily get hold of their print material was Bussorah Street, right at the heart of Kampong Glam.

Waw Stories is proud to be part of the cultural story of Singapore’s Muslim and literary heritage. If you find yourself in Singapore, do pay a visit to Wardah Books.

This website uses cookies to improve your experience while you navigate through the website. Out of these cookies, the cookies that are categorized as necessary are stored on your browser as they are essential for the working of basic functionalities of the website. We also use third-party cookies that help us analyze and understand how you use this website. These cookies will be stored in your browser only with your consent. You also have the option to opt-out of these cookies. But opting out of some of these cookies may have an effect on your browsing experience.
Necessary Always Enabled
Necessary cookies are absolutely essential for the website to function properly. This category only includes cookies that ensures basic functionalities and security features of the website. These cookies do not store any personal information.
Non-necessary
Any cookies that may not be particularly necessary for the website to function and is used specifically to collect user personal data via analytics, ads, other embedded contents are termed as non-necessary cookies. It is mandatory to procure user consent prior to running these cookies on your website.
SAVE & ACCEPT